It was getting pretty tough to focus on this 12 week challenge since I started PiYo 3 weeks ago – PiYo has  ended up taking quite a bit of time.  I knew my running would take a hit, and am honestly glad that it didn’t take a bigger hit than it did.  My goal was to run a minimum of 240 miles and I ended up at 229.77 miles prior to resetting running goals in week 10 to reflect the time required of PiYo and weather considerations (it is so wet and cold outside – I haven’t run outside in 3+ weeks, sigh).  I’m pretty darn happy with that and if nothing else, it reminds me it’s time for a new pair of running shoes  😉  I’ve definitely put 500 miles on the ones I’m currently wearing.  HA!

At the end of the day, most goals were met and I lost weight, if only 2.6 pounds (I did weigh 1.2 pounds less yesterday when I thought I was done with this challenge, but that’s OK).  My goal was to maintain, so any loss is a win!  I never went above 145 pounds and my body fat did not go above 24% – both of those were my highest-priority goals.  If fact, I lost 1.4% body fat, ending up solidly in the 21%-range (21.4% today) and I could not be happier with that!  I have never had body fat percentages this low before!   I think you can see the changes in the pictures – things really tightened up!

I almost spent 5 hours a week being active – and I have the PiYo challenge to thank for that.  I was slipping big-time on this goal but then PiYo started and it’s not a big calorie-burner, so I had to step it up to keep burning my calories while getting stronger and more flexible.  I ended up coming in under my weekly 5 hour activity goal by only 9 minutes a week – and when you consider my steps per day – I bet I met the goal.  I move a LOT chasing these kids around  😉

Another great challenge with most goals met!  I can’t always control how much time I can spend being active, but I can modify calorie intake to off-set those challenges and that’s what I did.  I’ve learned these last 12 weeks how to plan each day the night before, and to think about modifications when things don’t go according to plan.  A great thing to figure out, no doubt! 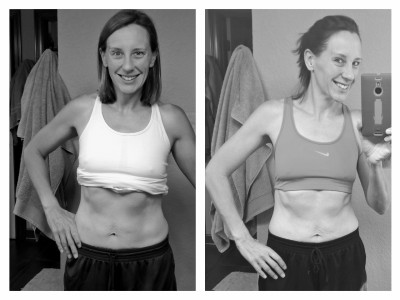 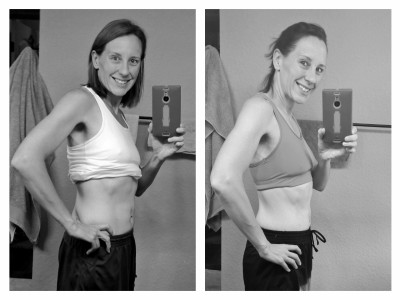